1.26 Unconditioned by time and unequaled teacher 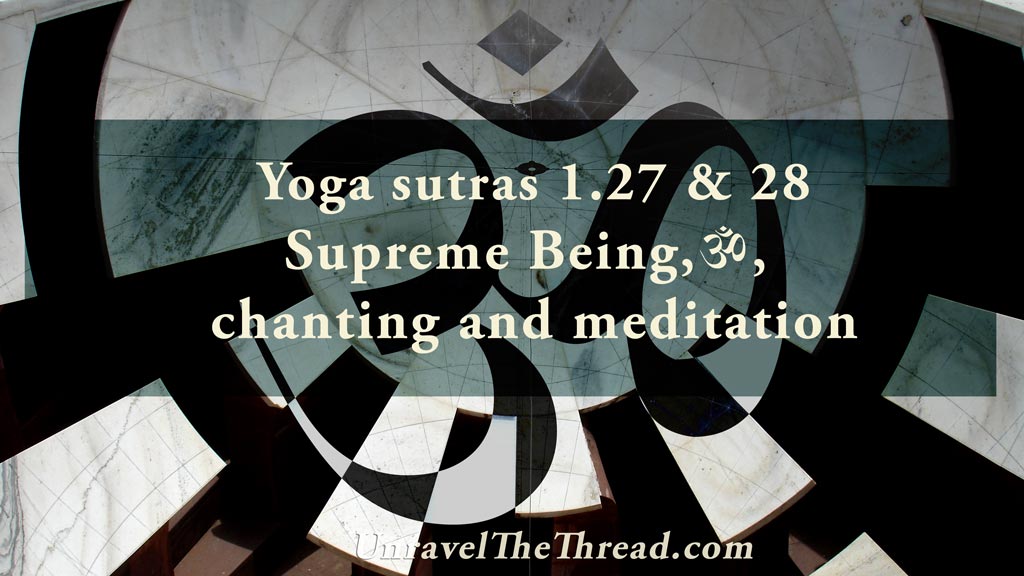 1.27 OM is the sound that designates Supreme Being.
1.28 Chanting OM and contemplating its meaning.

After introducing the path of humility in sutra 1.23 through surrendering the illusion of control and honoring Supreme Being, the subsequent verses explained the characteristics of Supreme Being. These two sutras, 1.27 and 1.28, offer a way to relate to and access Supreme Being. If Supreme Being cannot be defined in a few words, it makes sense to use a special symbol to point to all-encompassing and pervasive Being. OM is one way of transliterating the Devanagari symbol ॐ. (Devanagari is the alphabet used to represent the Sanskrit language). ॐ is also transliterated as AUM. The word used in the sutra for this mystic syllable is pranava, which relates the sound OM to the life force, prana. This symbol can be interpreted as a map to the whole journey to integration. The Upanishads are a collection of philosophical texts that appeared over the span of many centuries. One of the shortest Upanishads, the Mandukya Upanishad, very concisely defines AUM as everything that is, including all aspects of time, past, present and future. It also indicates that each one of the letters represents one of the four states of consciousness: awake, dreaming, dreamless deep sleep and a fourth state. (Although the transliteration includes only three letters, and the original symbol results from combining the equivalents of A, U and M, it is understood that there is a resonating echo implicit in the sound.) This fourth state is not even named, it is simply called “the fourth” to hint at the impossibility of fully encapsulating the all-encompassing transcendence of pure integrated consciousness.

Verse 1.28 offers a specific practice to embodying the path of ishvara pranidhana, the wholehearted cultivation of humility by repeating the syllable OM. The practice consists of two aspects, japa and contemplation. Japa, is the practice of whispering or silently repeating a mantra like OM. As this verse explains, the basic idea is to use a sound, syllable or phrase that is meaningful to you. This sutra also reminds you that it is not a mechanical repetition. The repetition is a reminder of your interest, motivation and awareness, in the same way that the first word of the Yoga Sutra, atha, acted as an invitation to presence. Like other mantras, chanting OM is an instrument of thought, so the repetition is accompanied by a reflection and deep contemplation on the meaning of the word being chanted.

There are many ways of chanting ॐ. Consider these two simple approaches. The first one is to chant OM starting with a soft sound, gradually making the sound louder and, after a while making the sound soft again until it becomes a gentle whisper. Then continue chanting silently and explore with curiosity if it is possible to make the internal silent chant subtler each time until it barely seems that you are chanting. Traditionally people use a mala, a garland of threaded beads, to keep count of their chants. Since 108 is an auspicious number in the yoga tradition, you may try chanting for 108 rounds. If you want to refine your chant, you can try to cushion the sound in between silence. That is, you first let a little bit of breath flow out without sound, then the sound OM, and towards the end, you let the sound fade out and finish with a little bit of soundless exhalation. Feel the sensations before, during and after each chant. As you chant open yourself up to the mind transcending meaning of Supreme Being. As with any aspect of yoga, no strain, no struggle and no self-judgment. You may also consider finishing each chant focused on feeling the lasting “m” vibration inviting you to savor the experience, as if tasting something truly delicious, producing a gentle inner smile.

The second approach is chanting the sound as A-U-M. Notice how the A sound happens toward the back of your mouth, the U sound towards the middle of the mouth and the M sound is generated with your lips closed. In other words, the AUM sound encompasses the whole range of your mouth. You may also add an extra layer to your chant by imagining the A sound originates at the center of the pelvic floor, and that the vibration flows up along the center of your body. Then you imagine the vibration flowing towards your heart center, while transitioning smoothly from the A sound into the U sound. Continue imagining the vibration flowing up along the center axis of your body. As the vibration travels towards the center of your brain, the sound transitions towards M. Of course, you can also explore changing the volume, from low to high, to low again and finally to silent. It is important to emphasize to also contemplate the meaning of Supreme Being and your direct experience of it. What happens when you practice japa on ॐ as you reflect on its meaning? What happens when you chant with full attention, open mind and open heart and with the intention to listen to whatever happens without expectations? How do you feel?

As usual, one more way of exploring the meaning of this sutra is by chanting it.
You can choose to chant it in its traditional form:

for 1.27 each word is chanted individually

for 1.28 some of the words come together

The other option is chanting each word in the sutra individually: 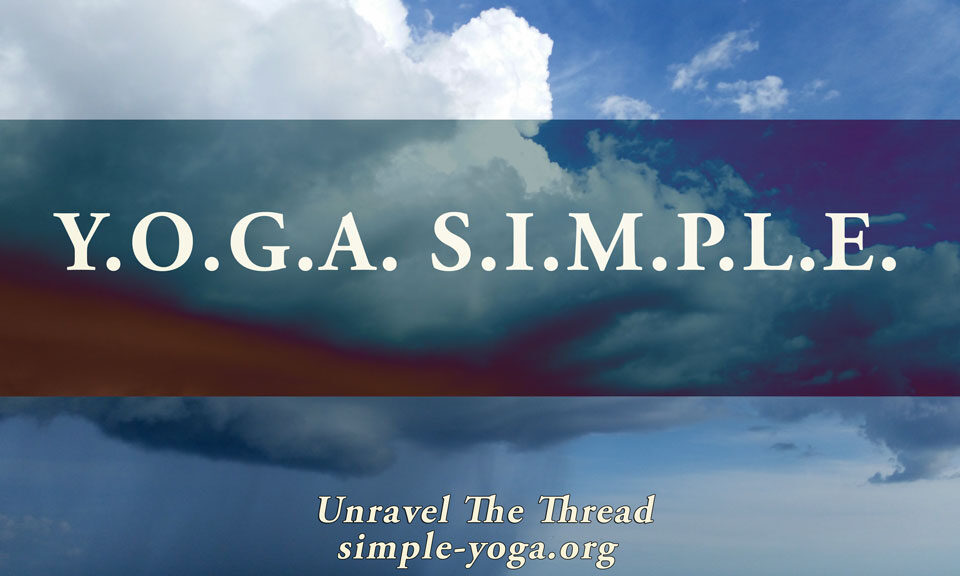 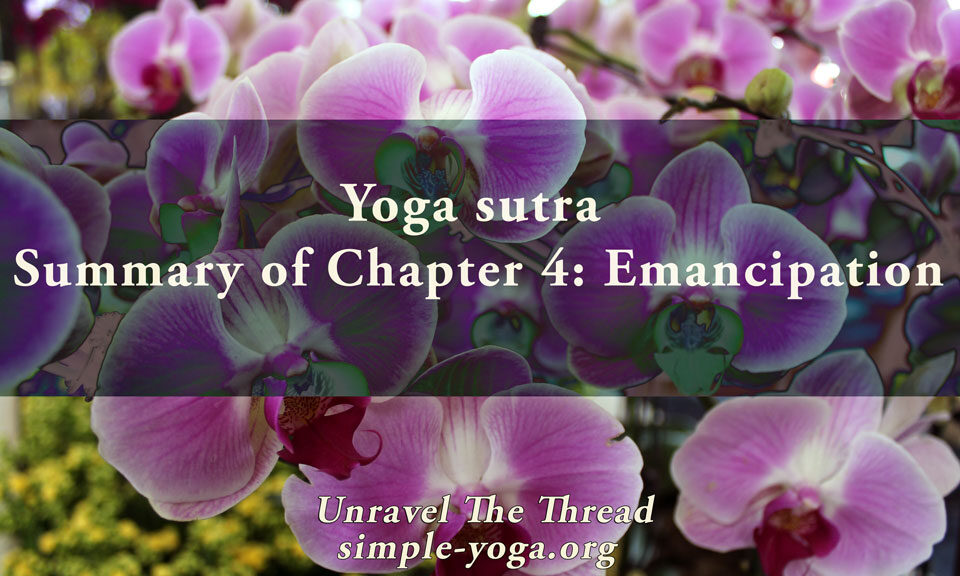 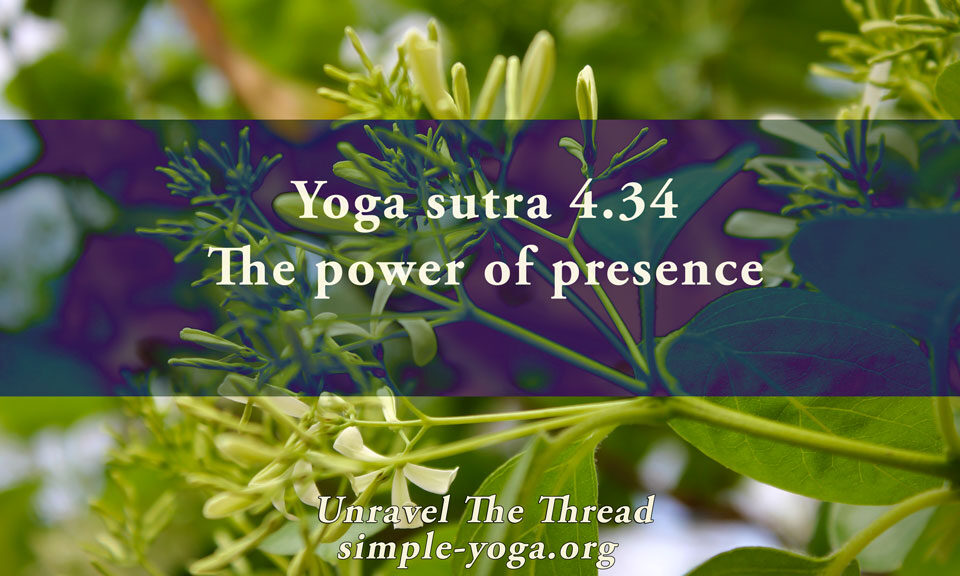